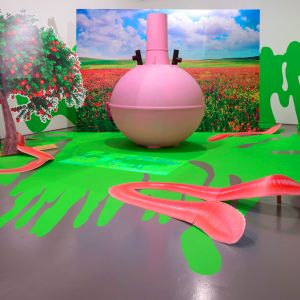 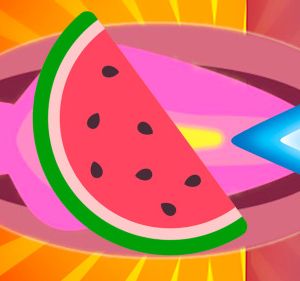 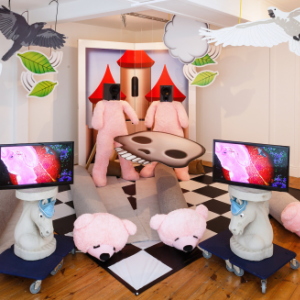 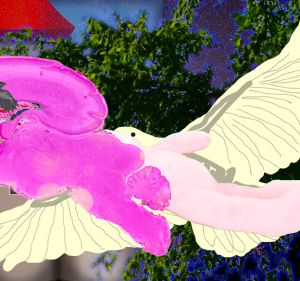 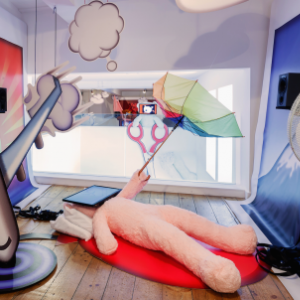 Through collisions of image, noise, objects, language and bodies, Heather Phillipson’s videos and sculptural installations behave as places, musical scores, poems and nervous systems – attending to how physical and affective ‘selves’ are constructed, manipulated and, above all, escape. Often rendered as walk-in conglomerations of readily accessible materials (digital images, paint, cardboard, words, audio loops and reproducible consumer detritus), her works stake out an ambiguous territory in which cultural references and emotional responses are mutually contingent and reactive. Collapsing distinctions between the forthright and the inarticulable, the banal and the ecstatic, and between metaphor and extreme literalisation, Phillipson’s work performs constant tonal shifts, disruptions and bleeds. In so doing, it oscillates between physical intimacies and conceptual distances – desire, sensuality, touching and being touched, shame, anxiety, (over-)exposure, resistant surfaces.

Phillipson is also an award-winning poet and has published three collections of poetry: a pamphlet with Faber & Faber in 2009; NOT AN ESSAY (Penned in the Margins, 2012); and Instant-flex 718 (Bloodaxe, 2013), which was shortlisted for the 2013 Fenton Aldeburgh First Collection Prize and the Michael Murphy Memorial Prize. She was named a Next Generation Poet in 2014 and was Writer in Residence at the Whitechapel Gallery in 2015. Her work is held in a number of public and private collections.

How Can You Relate?, LUX AAP project, event, The Showroom, London, UK

As real as going to the grocery store, Rowing Projects, London, UK

And If It Was It Can’t Be Is, Rowing Projects/Wysing Arts Centre, UK

A Is to D What E Is to H, Galeri Caernarfon, Wales, UK*

Pool: An Observer’s Guide to the Garden Marathon (with Will Holder), Serpentine Gallery, London, UK

Something is Bound to Happen, Glynn Vivian Gallery, Wales, UK*

Wolstenholme Screenings(screening with Wolfgang Tillmans and others), Liverpool Biennial, UK

Rachel Corbett, Q&A with Heather Phillipson on her Frieze Project, blouinartinfo.com, 5 May 2016: http://www.blouinartinfo.com/news/story/1388705/qa-heather-phillipson-on-her-project-for-frieze-new-york

Elina Suoyrjo, The Mess of Getting Into It, interview with Heather Phillipson, n.paradoxa, issue 36, July 2015: http://www.ktpress.co.uk/nparadoxa-volume-details.asp?volumeid=36

Moira Jeffrey,  Heather Phillipson - Art: the Nature of Us, The Scotsman, September 13 2014

Adrian Searle, Weird journeys with Heather Phillipson on the Tyne’s wild side,        The Guardian, 27 June 2013:  http://www.guardian.co.uk/artanddesign/2013/jun/27/heather-phillipson-baltic-adrian-searle

Carol Rumens, Poem of the Week: Heather Phillipson, The Guardian, May 2013: http://www.guardian.co.uk/books/2013/may/07/poem-week-relational-epistemology-heather-phillipson

Leslie Kulesh, Heather Phillipson on her new book and how the internet delivers it, interview, Bullett, January 2013: http://bullettmedia.com/article/meta-on-meta-not-an-essay-heather-phillipson-talks-to-leslie-kulesh-about-her-new-book-of-poetry-and-how-the-internet-delivers-it/

In 2020 the plinth will be given over to Heather Phillipson’s giant swirl of whipped cream, adorned precariously with a red cherry, a fly and a flashing drone, which will contain a camera surveilling Trafalgar Square 24 hours a day.

Phillipson said she was overwhelmed to be able to display work in such a “social and politicised context”, and said her sculpture reflected the congregational and celebratory aspect of Trafalgar Square as well as its political importance as a gathering spot for protest.

The flashing drone will be equipped with wifi that passersby can log into to see the drone’s view over Trafalgar Square on their phones. Phillipson said the drone element was a comment on how we had come to accept a surveillance society.

“I think my work exists somewhere in the realm of exuberant unease, so this is apparently very celebratory at first glance but the more time you spend time with it, other elements will start to creep in,” she said. “The plinth becomes a monument to hubris and impending collapse.” 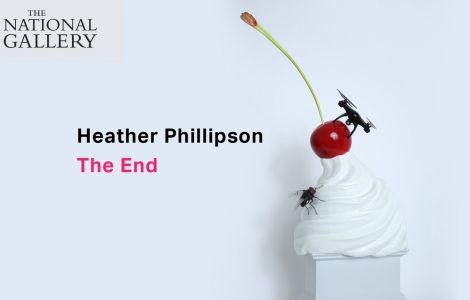