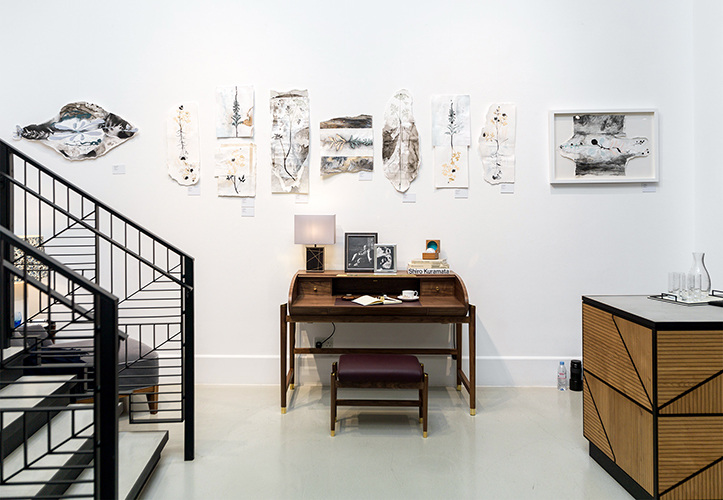 Kerry Lemon’s mixed media botanical paintings are characterised by highly tactile and collaged surfaces, featuring endless combinations of paint, ink, stitch, pencil, print, pastel, gilding. Each piece begins with a single hand painted screen print which is then torn and cut again and again, adding and subtracting elements in seemingly endless combinations until a conclusion is reached. She works across multiple pieces in flux at the same time, intuitively exploring possible outcomes, enjoying the highly physical (and often frenzied) nature of the process.

However, the work is not only driven by its physical creation. It continues themes explored on her Artist Residency at Royal Holloway University 2014-16 where she worked with plant molecular biologists. Collaborating with a range of scientists and project partners, Kerry explored the potential of designing new fantastical botanical forms and bringing them to life. In addition, the decision to move to the south coast has led to pivotal new elements within the work. Turner inspired seascapes appear in scraps and backgrounds throughout this series of paintings.

The common, rootless yet so often distorted English plants hint at her motivations and sit juxtaposed within the hostile environment of the English Channel. This knowledge then demands a second look. A chance to further understand creative decisions made and the powerful role that art has played in her life. A seductive opportunity to construct new realities.

'Spirit of King's' by Liz Middleton to be unveiled

Artscape are delighted to be representing the fine art works by artist Kerry Lemon Kerrys exhibition Wild Formation at Linley...

Artscape have been appointed to curate and project manage the first HS2 Artist in Residency which will run for an initial...