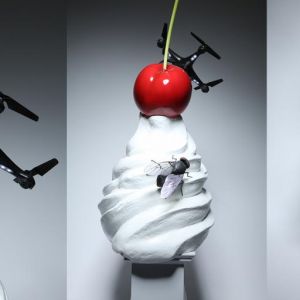 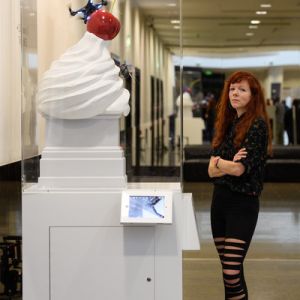 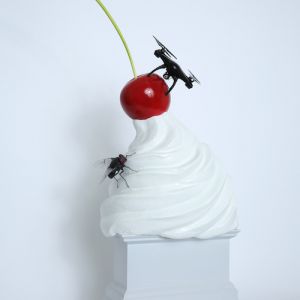 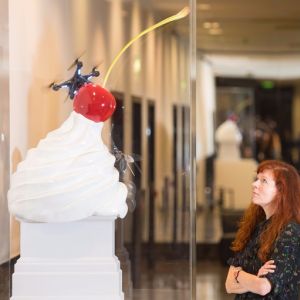 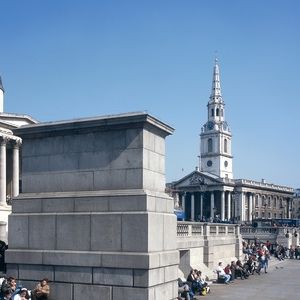 Through collisions of image, noise, objects, language and bodies, Heather Phillipson’s videos and sculptural installations behave as places, musical scores, poems and nervous systems – attending to how physical and affective ‘selves’ are constructed, manipulated and, above all, escape. Often rendered as walk-in conglomerations of readily accessible materials (digital images, paint, cardboard, words, audio loops and reproducible consumer detritus), her works stake out an ambiguous territory in which cultural references and emotional responses are mutually contingent and reactive. Collapsing distinctions between the forthright and the inarticulable, the banal and the ecstatic, and between metaphor and extreme literalisation, Phillipson’s work performs constant tonal shifts, disruptions and bleeds. In so doing, it oscillates between physical intimacies and conceptual distances – desire, sensuality, touching and being touched, shame, anxiety, (over-)exposure, resistant surfaces.

Phillipson is also an award-winning poet and has published three collections of poetry: a pamphlet with Faber & Faber in 2009; NOT AN ESSAY (Penned in the Margins, 2012); and Instant-flex 718 (Bloodaxe, 2013), which was shortlisted for the 2013 Fenton Aldeburgh First Collection Prize and the Michael Murphy Memorial Prize. She was named a Next Generation Poet in 2014 and was Writer in Residence at the Whitechapel Gallery in 2015. Her work is held in a number of public and private collections.

Located in Trafalgar Square, the Fourth Plinth was built in 1841 and was meant to hold a statue of William IV but, due to insufficient funds, remained empty.

Over 150 years later, the Fourth Plinth now hosts a series of commissioned artworks by world class artists and is the most talked about contemporary art prize in the UK.

On the plinth: 'The Invisible Enemy Should Not Exist'

On the plinth this year is Michael Rakowitz's 'The Invisible Enemy Should Not Exist'.

Michael started 'The Invisible Enemy Should Not Exist' project in 2006. It attempts to recreate more than 7,000 objects which have been lost forever. Some were looted from the Iraq Museum in 2003, while others were destroyed at archaeological sites across the country during the Iraq War.

For the Fourth Plinth, Rakowitz has recreated the Lamassu. This winged bull and protective deity guarded the entrance to Nergal Gate of Nineveh (near modern day Mosul) from c700 BC until it was destroyed by Daesh in 2015.

The reconstructions in 'The Invisible Enemy' project are made from recycled packaging from Middle Eastern foodstuffs. The Lamassu is made from 10,500 empty Iraqi date syrup cans. This represents a once-renowned industry now decimated by war.

The inscription is written in Cuneiform, one of the earliest systems of writing, on the side of the Lamassu reads: “Sennacherib, king of the world, king of Assyria, had the inner and outer wall of Ninevah built anew and raised as high as mountains.”

Rebuilding the Lamassu in Trafalgar Square means it can continue to guard the people who live, visit and work in London. It is the 12th work to appear on the Fourth Plinth since the programme started, and will be there until March 2020. 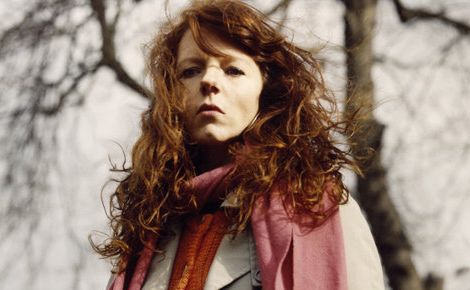 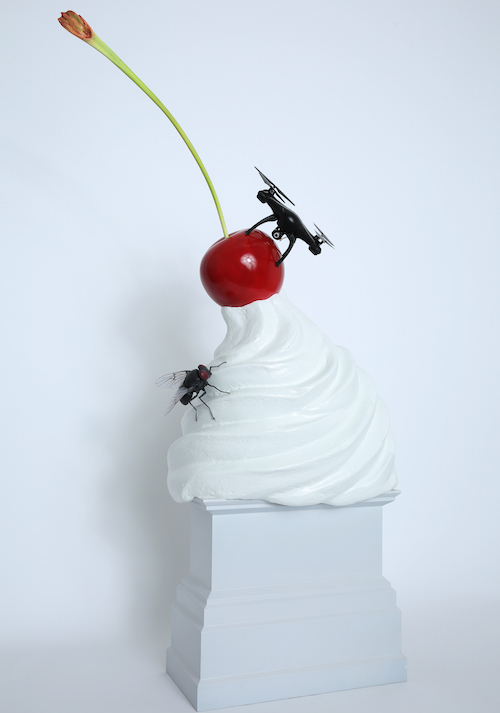