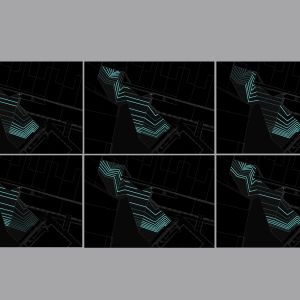 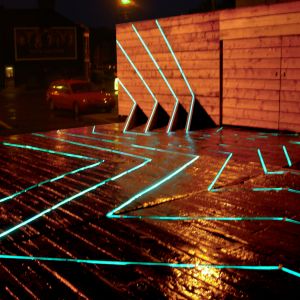 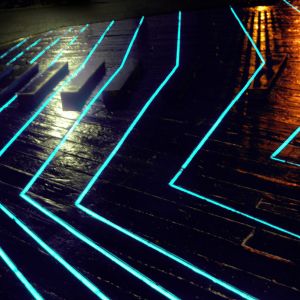 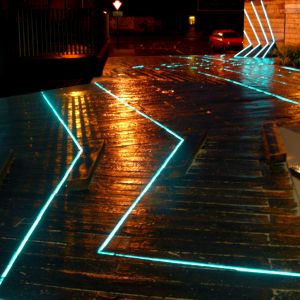 Esther Rolinson, who specialises in the use of light, was appointed to be part of the team in early 2002. It emerged later that coincidentally she had grown up in Coventry and so her experience and background took on an additional relevance.
The client and InSite Arts identified the need to create a dramatic focal and arrival point at the inception of the project. The main part of Esther's brief was to consider a work for the main entrance area of the site and she also was invited to think about the lighting of a highly prominent radio mast on site. Esther also became more involved in the general discussions with Sutton Vane, lighting consultants, who became part of the project team about how the whole site could be lit and the potential for incorporating a range of materials.

Esther's research culminated in a design for a permanent large scale work 'Trace Elements', sited at the entrance to Electric Wharf and based on a grid or mesh structure which refers to the electric cables which were laid underground the site. The final work comprised hundreds of metres of LED strips inset into railway sleepers that are programmed to create a wave like motion of light at the entrance of Electric Wharf . A second section will run along the canal edge and be implemented in line with the development programme for that phase of the development, scheduled for completion later in 2006.
Esther's design was also extended into bollards, installed to discourage local residents who continued to park illegally immediately outside the front entrance to Electric Wharf and to inhibit traffic flow in certain pedestrianised areas.

One of Esther's starting points for 'Trace Elements' was thinking about 'imagined spaces' and 'remnants' on the site. During site trials evidence of thousands of meters of live cables under the ground that had to be disconnected and removed were discovered; these cables ran throughout the site and beneath Esther's work. Her final work comprised hundreds of metres of LED strips inset into railway sleepers that are programmed to create a wave like motion of light at the entrance of Electric Wharf. A second section will run along the canal edge and be implemented in line with the development programme for that phase of Electric Wharf, scheduled for completion later in 2006.

The work functions as waymarking, referring to water, and wraps around the development to lead residents and visitors to Electric Wharf to the canal edge. Esther's principle aim was for the work to be fully integrated with the site and for people to discover it as they walk around. Esther worked with a number of professional advisors who supported her in resolving the technical complexities of integrating LED's in such volume into the public realm. Larry Priest worked with Esther and her team to address the real technical difficulties and challenges that arose working with the materials specified. For example, it was far more difficult to drill and route reclaimed timbers, as opposed to new timbers, to insert the LEDs. 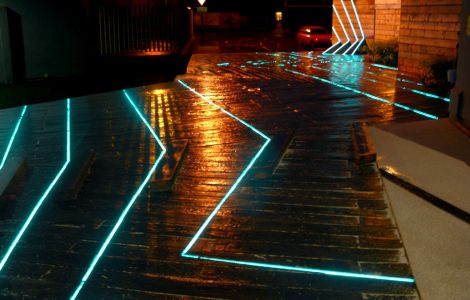 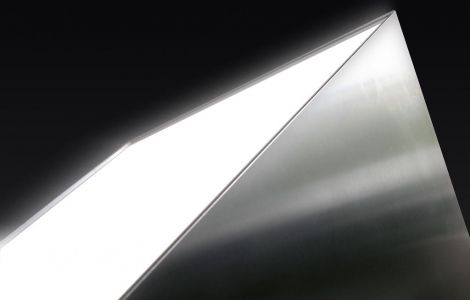 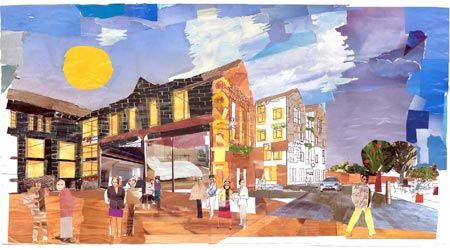 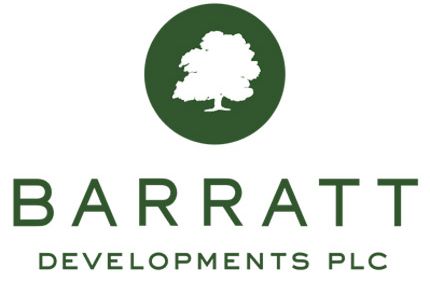 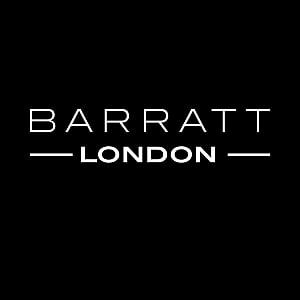